Match the mode for the space

Auckland Transport Executives and the Chair again prove that they are talk and no action when it comes to the livability of a City especially its City Centre. The latest from AT in regards to Customs Street having busses removed to improve the flow of cars through a core City Centre area made me shake my head at the minimum. Greater Auckland were not impressed either:

A phrase that sends shivers down my spine
"buses will be removed to improve traffic flow"https://t.co/nQoWqvQfvj

To turn Customs Street into a 6 lane car sewer will sever Britomart and the Ferry Terminal from Queen Street and the core of the City Centre that follows Queen Street to uptown. Thoroughfare traffic should be using the motorway network and Grafton Gully if people need to get from east Auckland to the Harbour Bridge and vice versa. Customs Street would become an excellent transit mall for busses and maybe Light Rail linking Britomart to Symonds Street, Fanshawe Street and the Light Rail Lines heading to Wynyard Quarter and the North Shore. Speaking of which where is 6 lanes of Customs Street cars meant to go when part of it and Fanshawe Street will reduce those lanes to make way for Light Rail.

While marco-level planning is what I usually do it does not mean I am going to skimp out in creating quality public spaces for my Cims and the tourists. And of course the City Centre is the prime public space.

You will see 4-lane roads running through the City Centre but these roads will often contain one or more of the following:

This allows transit and service vehicles to have continued access to core of the City Centre as people, goods and even the trash have to be moved around (and out of) the City Centre.

If you are wondering about this 6-laner that has two bus lanes with that runs right by the Central Station there is a reason why I have done this. First of all a large 12-platform heavy rail (with subway underneath) station to place it in the middle of the City Centre would sever the place even worse than the 6 or even 12 lane roads. So in this instance the station sits on the southern border of San Layton City Centre to which (and keeping consistent with above) a large road forms that norther border of said City Centre. Remember heavy rail is bringing in commuters from longer distances so to travel within the City Centre itself you have:

All which are less space intensive!

In any case this is the urban geographic layout of San Layton City – to which I will be focusing on the City Centre: 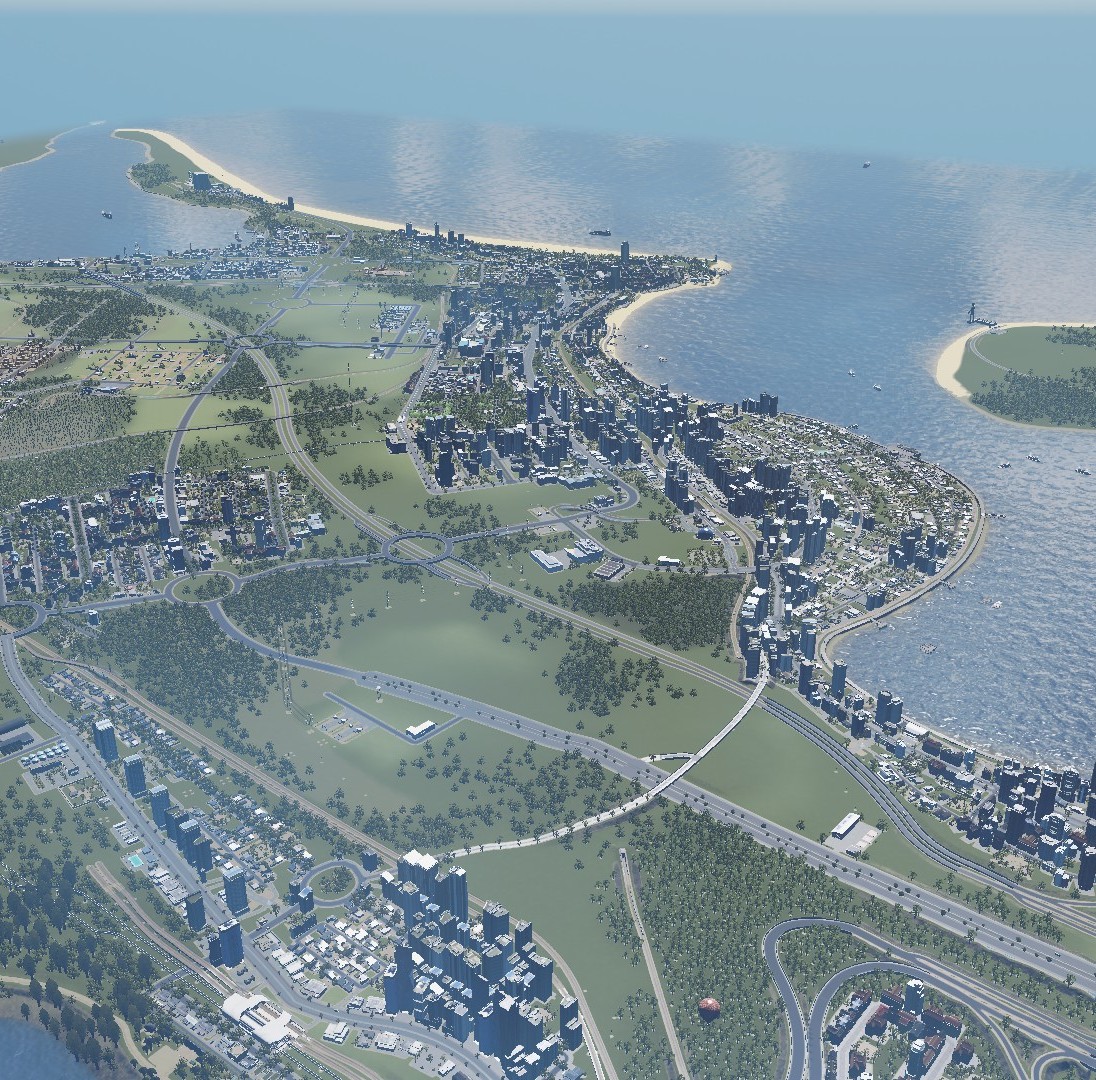 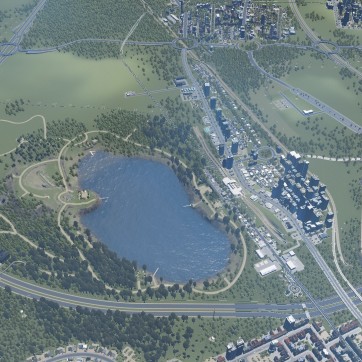 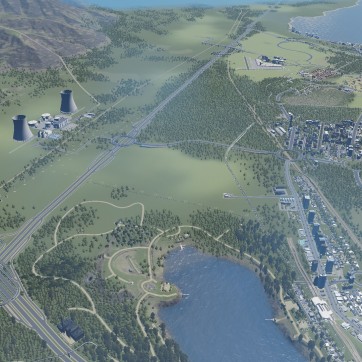 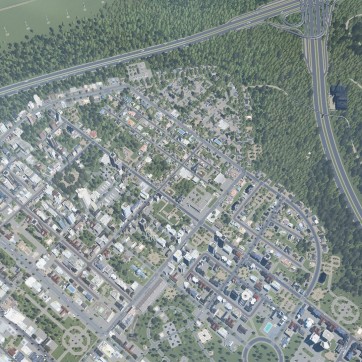 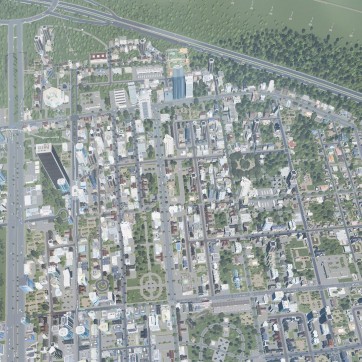 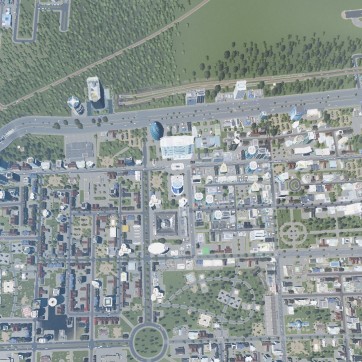 San Layton City is a dual-core City with multiple satellites all connected by either road or some form of transit (usually rail).

If you are wondering what the following picture and subsequent pictures like it are this is the closest I get to a Shared Space: 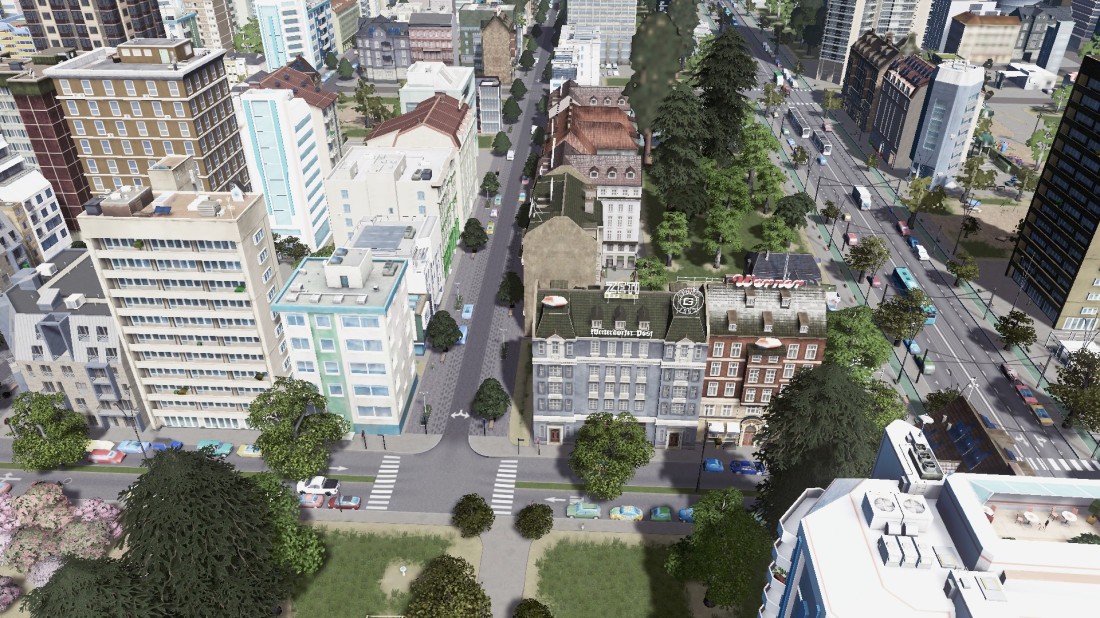 While these are pedestrian or transit malls:

Monorail does look quite Gotham: 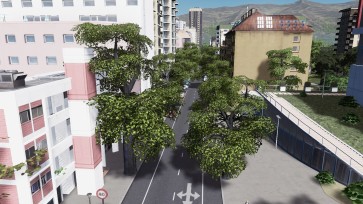 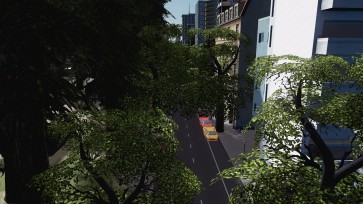 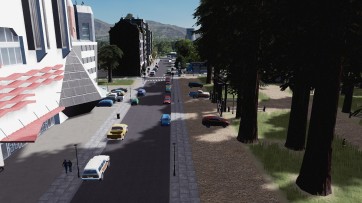 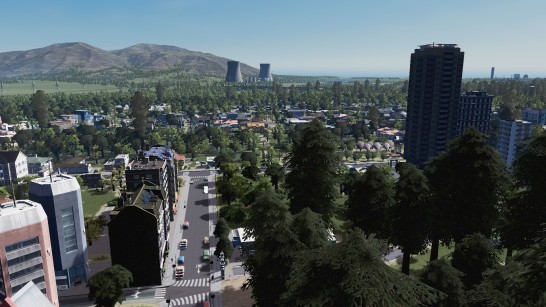 And now for Central Station and some big roads – oh and a sky cafe. You can also see the monorail running through the City Centre as well:

And now the main road that connects the City Centre up to the Satellites further east. Centre Bank is the main leisure area on the other side of the rail station:

Finally the second bit minor City Centre – Washington Heights and how that is built around a bus station. Again the larger roads form the boundaries with smaller roads often transit malls or shared spaces forming the interior network :

This is how you outlay your City Centre. Not with big 6 lane car sewers but with public spaces and extensions of living rooms using shared spaces, pedestrian and transit malls and of course transit lanes!!!

Even 9am on a Sunday the City Centre is teeming with Cims!

Can we fix it? Err maybe… In Cities Skylines your city can fail in one of two ways; population abandons it because your City Management was less than desirable, or the City has become too successful and both housing and infrastructure have not kept up. Well for Valhalla City we had a case of the […] 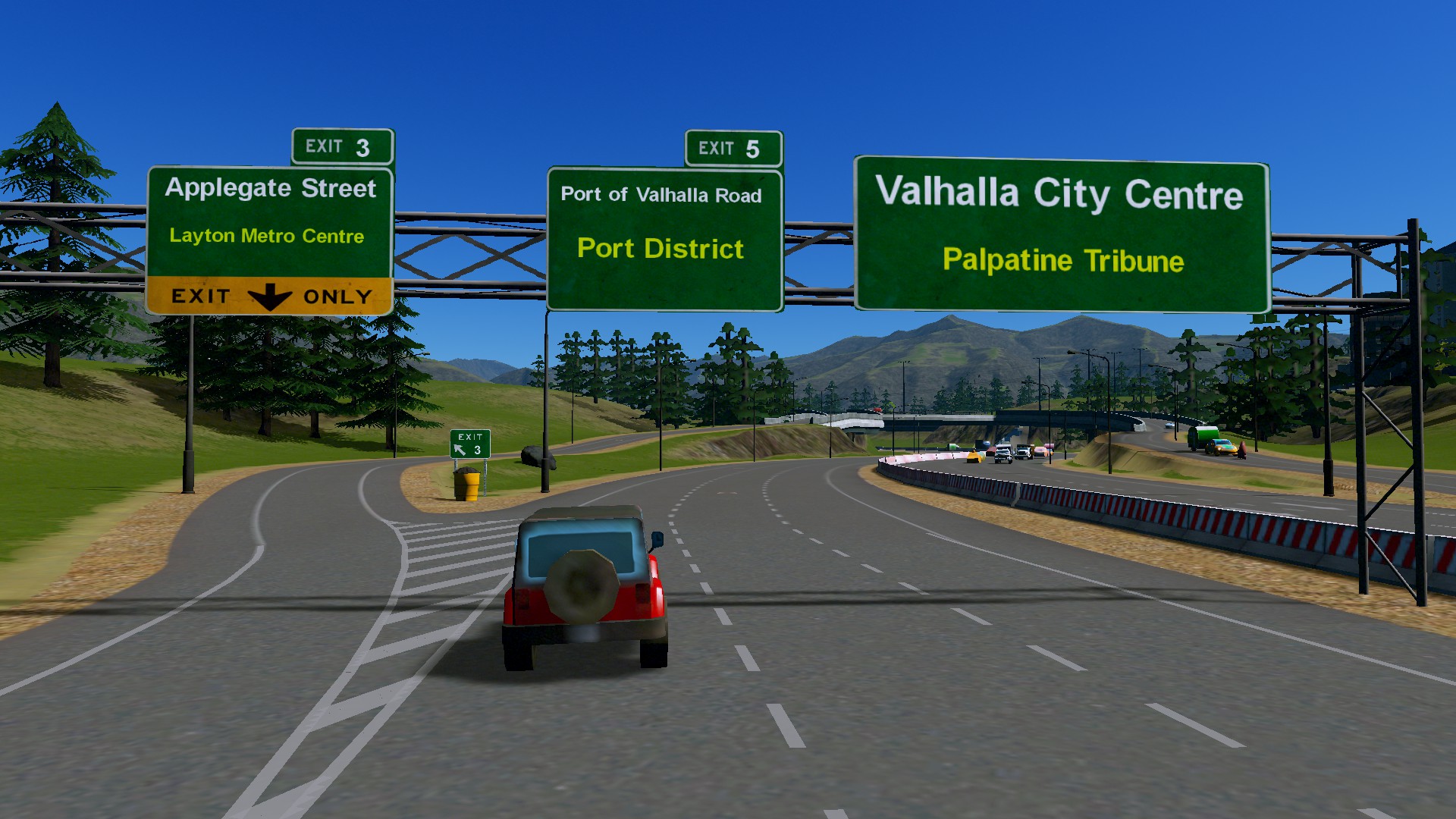